Richard M. Rocha is a life-long resident of Tampa, Florida. He graduated in 1972 from Jesuit High School and attended the University of Florida where he received a Bachelor of Science Degree in Journalism and Communications. Richard left Tampa to pursue a law degree at South Texas College of Law in Houston, Texas. In 1979, he received his Doctor of Jurisprudence degree and returned to the Tampa Bay area where he would begin the next 30 years practicing law, as a Tampa personal injury lawyer.

Upon returning to Tampa, Richard Rocha had the pleasure and high privilege of serving under the Honorable J. Salcines, State Attorney for the 13th Judicial Circuit, as an Assistant State Attorney. Here, he learned the art of trial practice. He began his tenure as a prosecutor in the misdemeanor division.  This was followed by stints as a Traffic Court and Juvenile Court prosecutor.  Richard was later promoted to Felony Division prosecutor, where he tried cases ranging from murder, to arson, to drug trafficking. His time spent with the State Attorney’s Office prepared him for the transition into private practice.

In 1981, the Rocha and Fernandez P.A. Firm was founded. Here, Richard spent the next five years honing and applying the skills he had acquired during his years as an Assistant State Attorney. In 1986, he branched out on his own to establish the Richard M. Rocha P.A. Law Firm.  For the past 25 years, he has served the Tampa Bay community, fighting for the rights of those who have been injured due to the negligence of another. Tampa Personal injury lawyer, Richard Rocha is fluent in both Spanish and English, giving him the opportunity to offer representation to the Hispanic community as well. As a licensed Federal Court attorney for the Middle District of Florida, Richard has both the knowledge and years of experience to undertake your case. 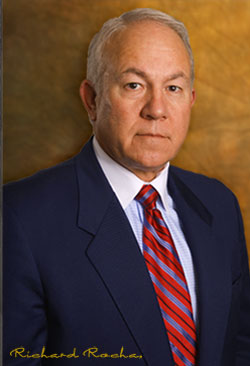